Codex of the Synapse: Folio D2.1

"Zora has the quality of remaining in your memory point by point, in its succession of streets, of houses along the streets of doors or windows in the houses, though nothing in them possesses a special beauty or rarity. Zora's secret lies the way your gaze runs over patterns following one another in a musical score where not a note can be altered or displaced. The city which cannot be expunged from the mind is like an armature, a honeycomb in whose cells each of us can place the things he wants to remember. " 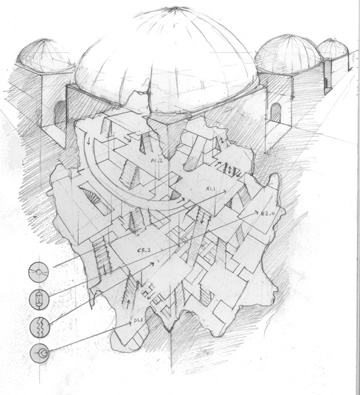 The Keepers often refer to a series of intertwined texts in which their entire Mytharchy is mapped out, known simply as the Codex of the Synapse. These illuminated manuscripts do not exist in a single unified book, and may never have. Instead, like the Synapse itself, the Codex exists only in fragments, its folios scattered in not only in physical space but cultural space as well. Often words or images from a Folio are excerpted and incorporated into other local-world texts, both sacred and secular [many of those texts are cited in this translation]. Connected to one another by an intricate web of indexed cross-references, The Folios form a labyrinth of ideas constructed to preserve - and to conceal - The Synapse.

The Keepers navigate the Folios as one might explore the rooms inside a vast house, a memory palace that allows them to keep track of the intricate links that join one Codex to others. The geometry that governs this palace is such that a Keeper versed in it can interpolate the path to a Codex he has neither read nor even heard of. Knowledge of the Synapse has thus endured, even though an individual Keeper rarely possesses more than a few words or images from any Folio, and never more than one Folio in its entirety.

As I attempt to reconstruct their reference labyrinth from these ruins, and prepare the complete Codex of the Synapse, I am resigned to the fact that I am reconstructing only one possible permutation of this text from among infinitely many. Like the reconstruction of any ruin, the process requires many patches for continuity's sake, to bridge the gaps of what was lost. Strangely, this seems to be part of the tradition intended by The Keepers, another aspect of the Labyrinth's dimensions, which they call the Chain of Commentary.