Codex of the Synapse: Folio B3.4

[The Aboriginal] Turinga is an oval plaque made of stone or mulga-wood. It is both musical score and guide to the ancestor's travels...his passport and his ticket "back in." 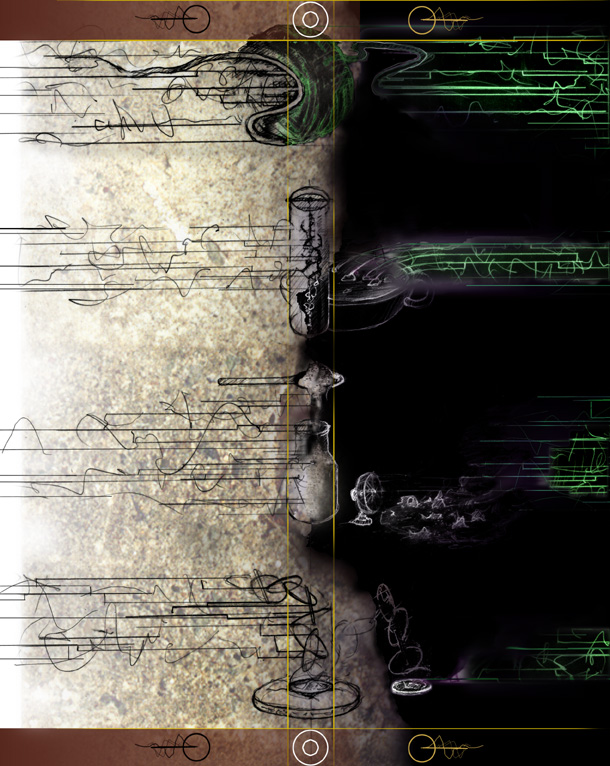 A Pattern Language amulet can assume various forms. Some of these containers may be adorned with Baroque flourishes or Shaker austerity, depending on the local-world culture of the Keeper who crafted it. All Pattern Language Amulets, regardless of their local-world origins have one trait in common. Every amulet contains a frozen instance of chaos, which the Keepers consider the purest (i.e. least reclaimed into image) form of Pattern Language. Revealing some arrested instant of randomness, usually in a natural process or a chance operation, these fragments may be almost anything: a piece of irregular glass, a string of sugar crystals, a tangled ball of string, jars of sand, and even a single flipped coin, bonded where it lay into a piece of clay or lead. Recent amulets have been found, which employ static-electric, magnetic, and photomechanical processes. In the event of an Uncreation Event, the amulet must be destroyed, the pattern language frozen in place must be set free. The sugar crystals are dissolved, the string unwound, the sand scattered, the static-electric charge dispersed, the coin pried loose and flipped again.

The Keepers cherish their amulets as objects suspended halfway in the Synapse and halfway in the local-world. These reliquaries of randomness often resemble lanterns, as if to to light one's path on a foray into the obscure Synapse. Other amulets look more like tokens of admission, reminding the Keeper who carries them that the Synapse is always accessed through turnstiles of one sort or another. In the ancient Greek custom (possibly of Synaptic origin), the pennies laid on the eyes of the dead are tributes both to Charon and to Chance.