Codex of the Synapse: Folio A2.2

A child learning to read musical notation is given a mnemonic - "Every good boy deserves favor" - to remember the odd notes of the musical staff (E,G,B,D,F). It is not the meaning of the words that summons the notes, but rather the phonetic structure, or a decoding of this structure. Indeed, we could completely change the content - "Even green branches die, finally" - and still receive "the message" of the mnemonic, embedded within it.

~ E.G. Berdichief, Music and the Mechanics of Memory 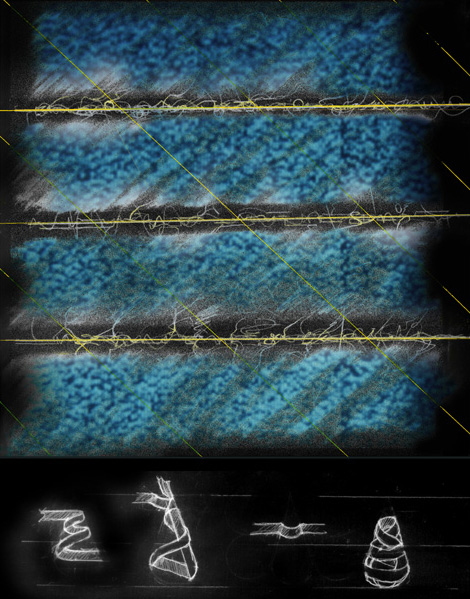 In the Synapse, a system of mnemonics called the Pattern Language channels lattice harmonics into a kind of communications relay among worlds. Through a cycle of emission and reclamation, Pattern Language circulates among the lattices and throughout the Synapse, like strands of RNA delivering messages from the nucleus of a cell. Each world emits Pattern Language as an imprint, an expression of the deep structure of its world-lattice. The "words" of this language express nothing in the way of content. Pattern language does not describe or depict anything. So foreign is the content of neighbor worlds to our perception that do so would be pointless, like reciting a poem in Arabic to an audience of Anglo phones. Pattern Language instead relies on conveying structures that lie beneath localized content. The result is a string of presences and absences, a musical language of tones and rests that embodies the essential qualities of a world.

Pattern Language, although it carries within it the imprint of a neighbor-world, is unintelligible, even imperceptible, in its pure form, except as white noise. It remains so until translated into images "native" to the local-world. (through the process of Pattern Language Reclamation) Any world can be reduced to pure pattern, and any neighbor-world can reconstitute that pattern in its own images. These images, which can take the form of any sensory experience, adhere precisely to the formal skeleton provided by the Pattern Language, just as the message of a mnemonic adheres to its form. Like the visible clothing on an invisible man, these images reveal the hidden structure of the Pattern Language, and in doing so reveal the worlds next door.